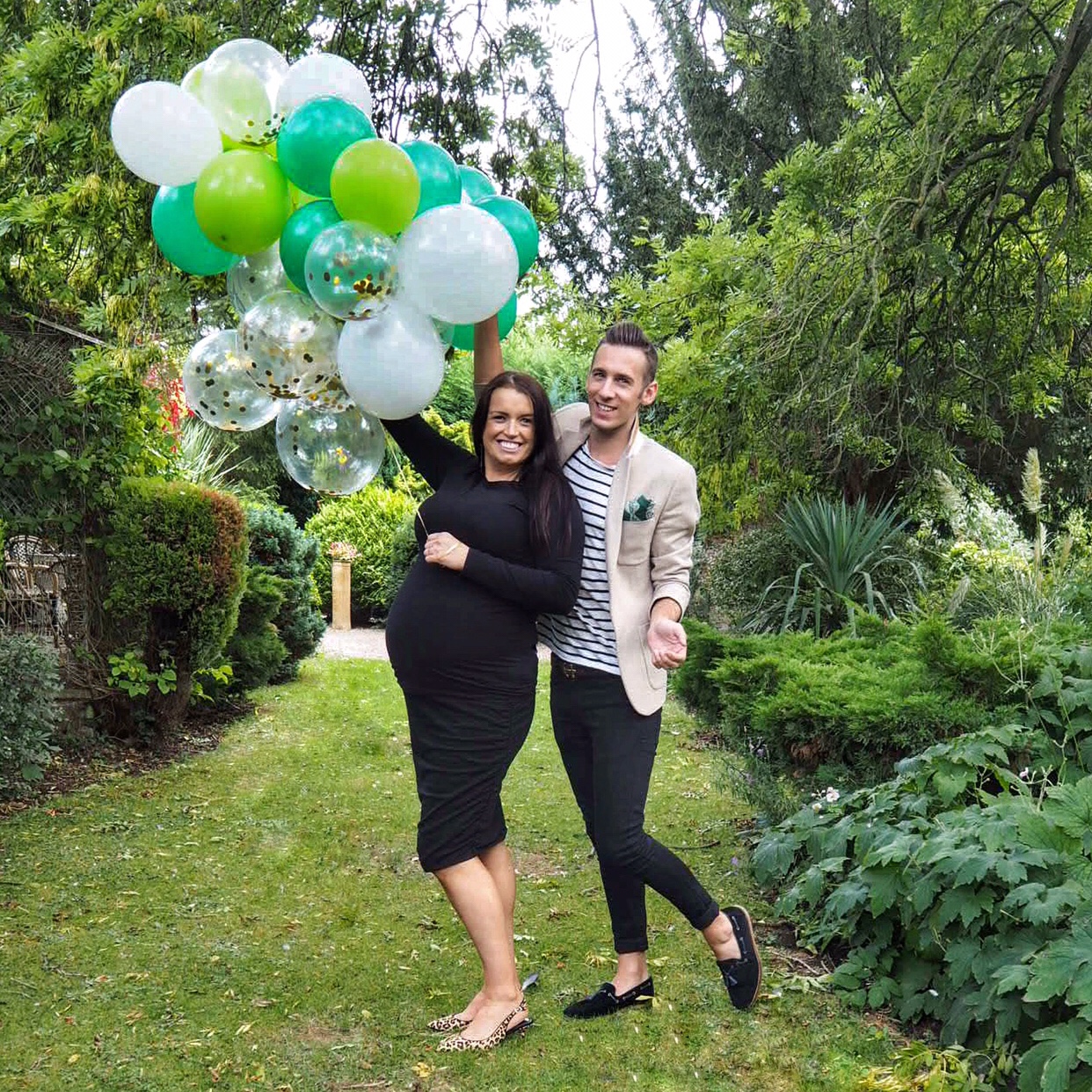 Well after weeks of build-up, planning, prepping and at some points panicking, the Baby Shower is now over!

The shower was for one of my closest friends Lynne who is due to give birth in late October/ early November. Now interiors – I can do, holidays – I can do, but events… hmmm?!? The problem is that the main organiser of the groups birthdays, parties, weekends away and any other big social gathering, is Lynne, who did I mention likes what she likes (i.e. polite for erm high standards).

I mean I don’t know anything about babies (I don’t think my fur baby counts) let alone baby showers, and so pulling this one off for my ‘particular’ friend (She is going to kill me haha) was going to be a big challenge – but one that I was prepared to take on.

I decided to sit down and tackle this in the same way that I would tackle exhibitions in the past – lots of tea and my trusty notepad. The two major things to plan and get locked down early were the venue and the date (but that is a whole separate blog on how to get a big group of people together on the same date!). As always I took to the internet for some initial ideas on venues and began by googling key phrases like ‘Baby showers in York’, ‘York baby shower’ and so on, in the hope that there would be a plethora of venues out there with a specific baby shower offering! However, I quickly found that baby showers aren’t a speciality celebration event that any half decent venue in York catered for – it was either a table in a restaurant or the standard answer of ‘we don’t do baby showers on a weekend’ (but incidentally all of them seem to be able to manage to cater for Hen Dos – which York is overrun with at the moment!).

It wasn’t until I was scrolling through conversations in my head that I have had with Lynne that I had the ‘Of course!’ moment – THE MOUNT ROYALE HOTEL. Lynne’s mum had worked here and Lynne grew up running around this family run hotel near York racecourse. Given her fond memories of the place it became the obvious choice. Not wanting to waste anymore time with scrolling through venues, I immediately contacted Kaz at the Mount Royale to get some idea of costings which I could then take to our Baby Shower Planning meeting. Kaz couldn’t be more lovely – she provided me with costings and gave me a tour of the possible locations within this beautifully decorated hotel. I was sold and so were the rest of the “Baby Shower Planning Committee”!

With the relief of having a venue locked down (that I knew would meet Lynne’s exacting standards!) on a date that nearly everyone could attend, it was time to get down to the detail of the actual event. Lynne, our friend Jane and I have all been a fan of the infamous Beverley Hill Martinique banana leaf wallpaper for years and so this was my inspiration for the Baby Shower stationary (plus green is gender neutral and so given that we don’t yet know the sex of the baby we had to steer clear of any gender specific colours!). I grabbed my laptop, made a pot of tea and ate my way through a packet of wine gums and set about my photoshopping. The lovely people from YPS Printing Solutions next door to my office printed the invites for me (for free!). I matched the baby shower quiz games and predictions sheets to the invites for a consistent look (because I am a little OCD like that!). Kaz even made labels to match for the party favours she created for all of our guests – a great example of the attention to detail and involvement that the venue provided. 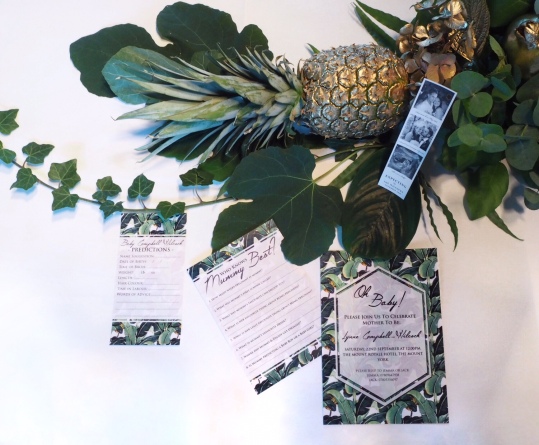 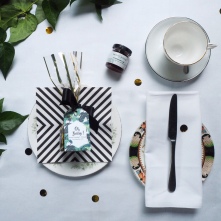 With the theme set in my mind we met up with Kaz at the Mount Royale to discuss the outdoor gazebo space and our theme. She was so enthusiastic and full of ideas ready and raring to get going on creating something special. Jane set about sourcing decorations to match the invites and tie in the theme, and balloons, pom poms, banners and bunting were promptly ordered – got to love AMAZON!

Its amazing how quickly time flies by – especially with a holiday in the middle of organising (did i mention I went to Lanzarote haha). After seeing a photo of the large empty table to be dressed I started to have a mild panic on the Friday morning, a day before the shower! In my panic I ran around my house grabbing possible items and props to decorate with and packed them all up ready to take to the venue the next morning.

On the morning of the Shower we arrived at the venue 2 hours early to decorate and set up (TIP FROM JANE: People always turn up early!) 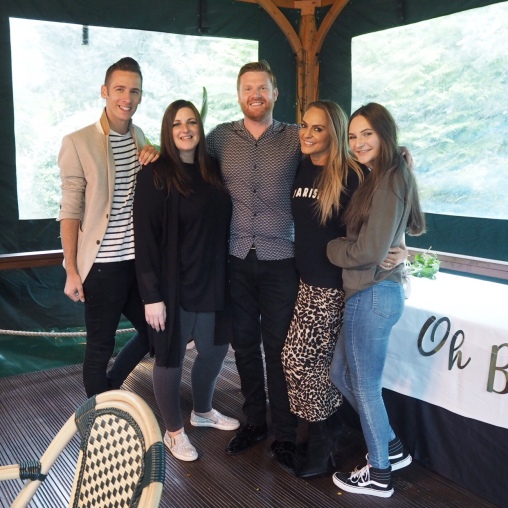 As we braced ourselves for the challenge ahead (holding a wicker basket of decoration and helium canister) we made our way to the gazebo to arrange the decorations. However, as we pulled back the gazebo door we were greeted by Kaz and a beautifully dressed table, candelabras and water station. She had said in our meeting that she would do a vase of flowers from their tropical indoor garden, but what she had created was way way way above and beyond any of our expectations. The long oval table was dressed with a central runner of leaves, candles, golden pineapples and little golden animals and was truly an amazing surprise (so much so that we even questioned whether to put our balloons up for fear of them lowering the high standard set haha!)

To the rear of the cosy gazebo was another long table ready to be filled with the afternoon tea sandwiches and cakes, and to the left was a table with a towering tropical bouquet and water dispenser with glasses. We set about blowing the balloons up but almost immediately encountered problems – who know helium canisters were so tricky!?! Jane and I were convinced it was empty, but it turns out you just needs a 16 year old who reads instructions to get you on track (thanks Pheebs!). With the balloons in full swing the rest of the decorating cavalry arrived to start on pom-poms and we were soon done and even had time for a gin before the Shower got into full swing! – BONUS 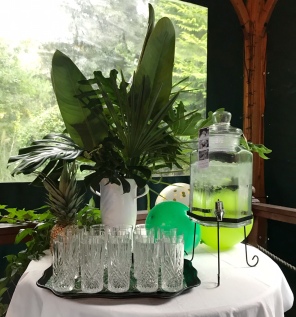 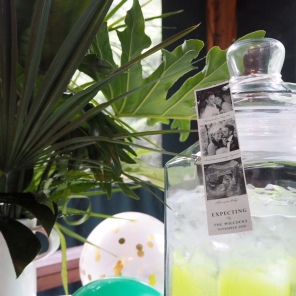 We were primed and ready for Lynne’s arrival and at 11.50am shortly before the special guests arrival the food was brought out to the gazebo. The food just kept coming and coming and coming and it got to the stage that there was so much, we were struggling to fit it all on the table! The Afternoon Tea selection was everything we could of wanted – all beautifully presented with a selection of sandwiches, smoked salmon roulade, savoury sun dried tomato mousses and crisps filling up the table. This was only half of the food as a team of staff swiftly carried through platters and cake stands of cakes, macaroons, and biscuits as well as individual Eton mess, lemon meringue and pina-colada milkshakes (non-alcoholic!). 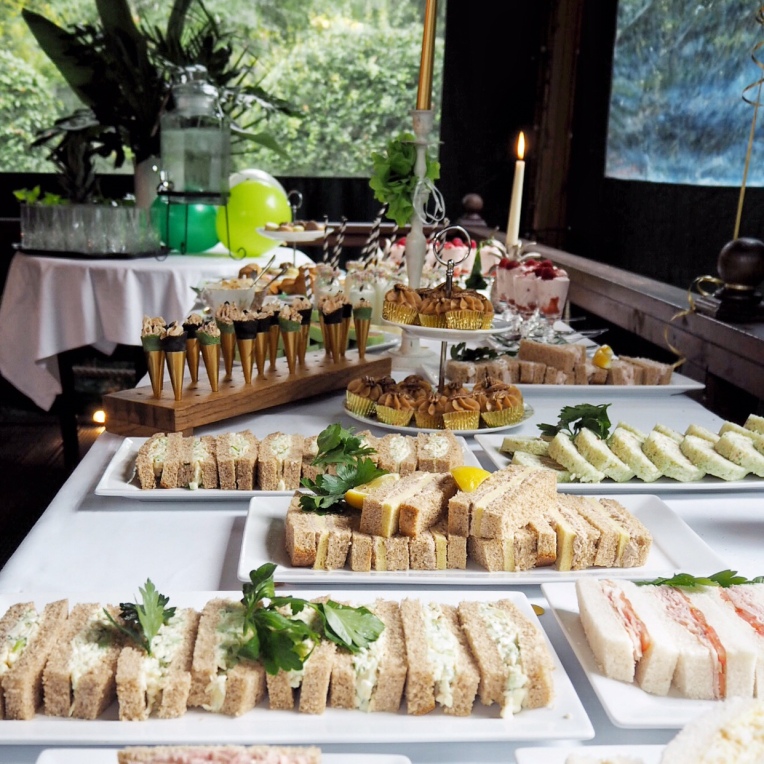 The food selection, like the exquisite decorations, were all lovingly thought out to complement our theme, with marble grey biscuits and green marzipan battenburg (Lynne’s favourite cake). The afternoon tea is £19.95 per head or just £26.95 per head with a glass of champagne, which was the option we went for. I have been to many afternoon teas all over the country, but I can honestly say this was one of the best for selection and value for money serving both quality and quantity. 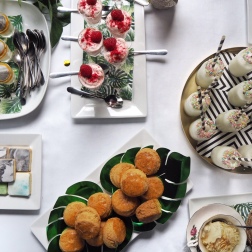 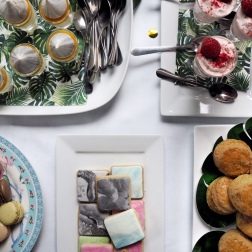 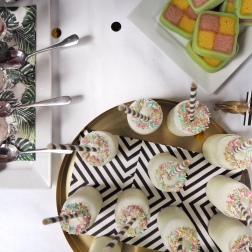 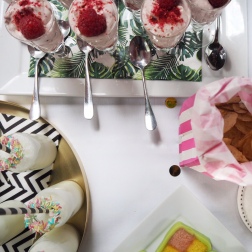 If you are looking for a Baby Shower in York, or just a Baby Shower weekend away I honestly cant recommend the Mount Royale enough. The family run hotel is the perfect choice, they were so attentive from the moment I enquired to the moment we all left after the Shower. The whole team went above and beyond to help create a day to remember and I can’t fault anything (and believe me I usually can!). The food was all freshly prepared and tasted beautiful, the event space was decorated to a extremely high standard and the service was impeccable. I honestly can’t think of anywhere else in York where you would get this sort of Baby Shower private venue, food and decoration for such a reasonable price.